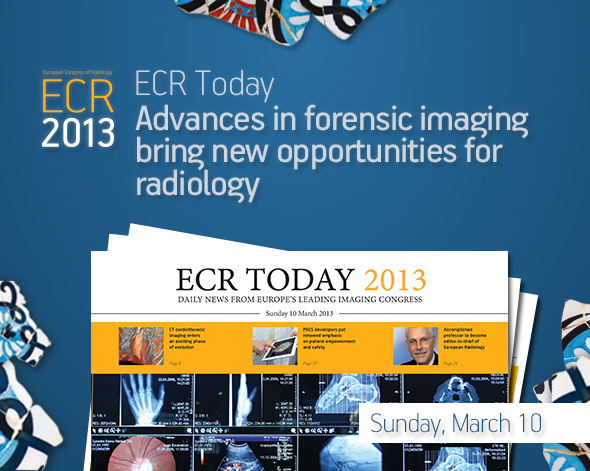 The ability to spot pathological imaging findings among normal post-mortem signs of degeneration may not be a universal skill among radiologists, but it could prove to be a useful, if not essential one. As the reliability of modern forensic imaging rapidly improves, forensic pathologists are increasingly seeking the help of radiologists to examine bodies non-invasively, so they should be prepared to answer that call, according to experts who will speak in a Special Focus Session on ‘Advances in forensic imaging’ today. The development of techniques such as spiral volumetric CT and, more recently, MRI, have dramatically improved the ability of radiologists to determine causes of death and detect other crucial post-mortem signs, providing an invaluable service that can supplement, and in some cases replace, traditional autopsy. 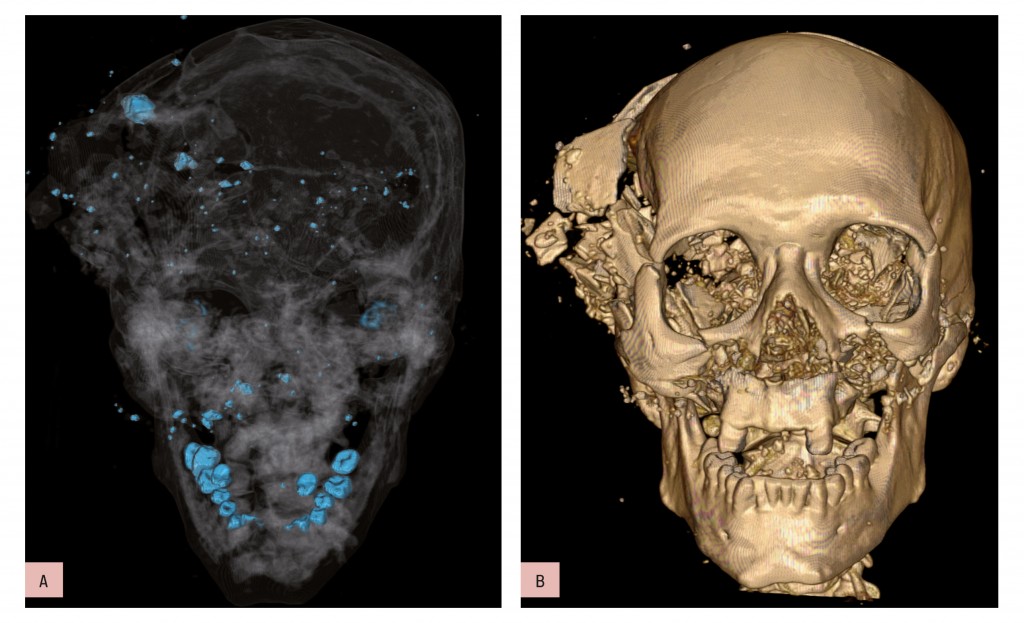 Bone and metal maximum intensity projection (MIP) reconstruction (a) and volume-rendered (VR) 3D-CT reconstruction (b). Homicidal death: characteristic bony and metallic fragments on the exit side of the skull, where the bullet caused a large loss of brain, leading to shattering of the skull.

However, training and regulation have not kept up with the pace of technological progress, meaning there is still plenty of room for improvement in this growing branch of radiology. This afternoon’s session will see established forensic radiologists review the current state of the field and discuss the most useful imaging techniques available.

Due to its strengths in the visualisation of bone structure and the detection of embolisms and gross abnormalities in soft tissue, CT has been widely used in forensic pathology for some time. Its advantages over MR in terms of the availability of equipment, relative simplicity, and the time constraints inherent in examining corpses, have made it the dominant modality in forensic imaging. The recent development of volumetric measurement has given this lead a further boost by introducing the ability to obtain images in different ways and focus more specifically on areas of interest. 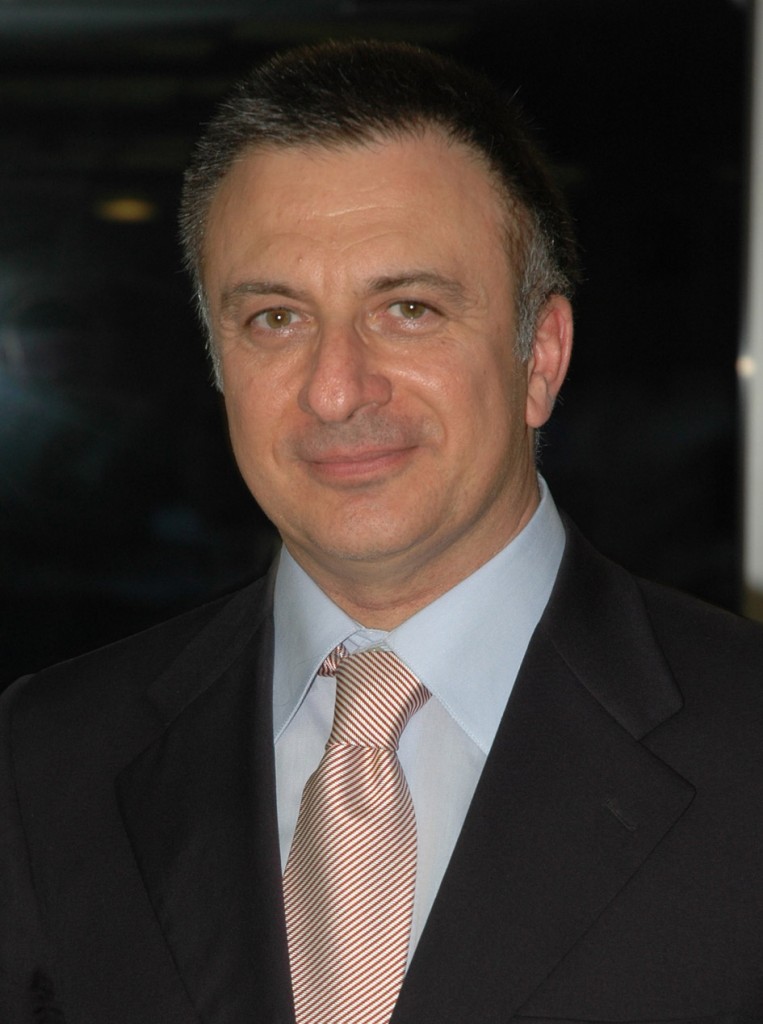 “This doesn’t always remove the necessity of conducting a regular autopsy, but it helps a great deal with the diagnosis and sometimes it proves to be enough to exclude the need for further analysis. There are many exciting developments in this field that can provide information about causes of death, including those originating from the vascular system, time of death, identity, anthropological information like the age, sex and stature of unidentified human remains, and, just as importantly, details of an attack on, or abuse of, a living person,” said Guglielmi.

Thanks to the development of specially created contrast techniques, CT can also be used to investigate the post-mortem vascular system. Multiphase post-mortem CT-angiography (MPMCTA), which involves the performance of one native CT scan and three angiographic phases (arterial, venous and dynamic), allows the vascular system to be imaged in a similar way to standard clinical CT angiography. A mixture of paraffin oil and a specially created oily contrast agent is injected via a device which reproduces the conditions of perfusion in a living body, enabling the radiologist to capture highly accurate images of any abnormalities in the vascular bed of the viscera, or lesions of the vascular system. 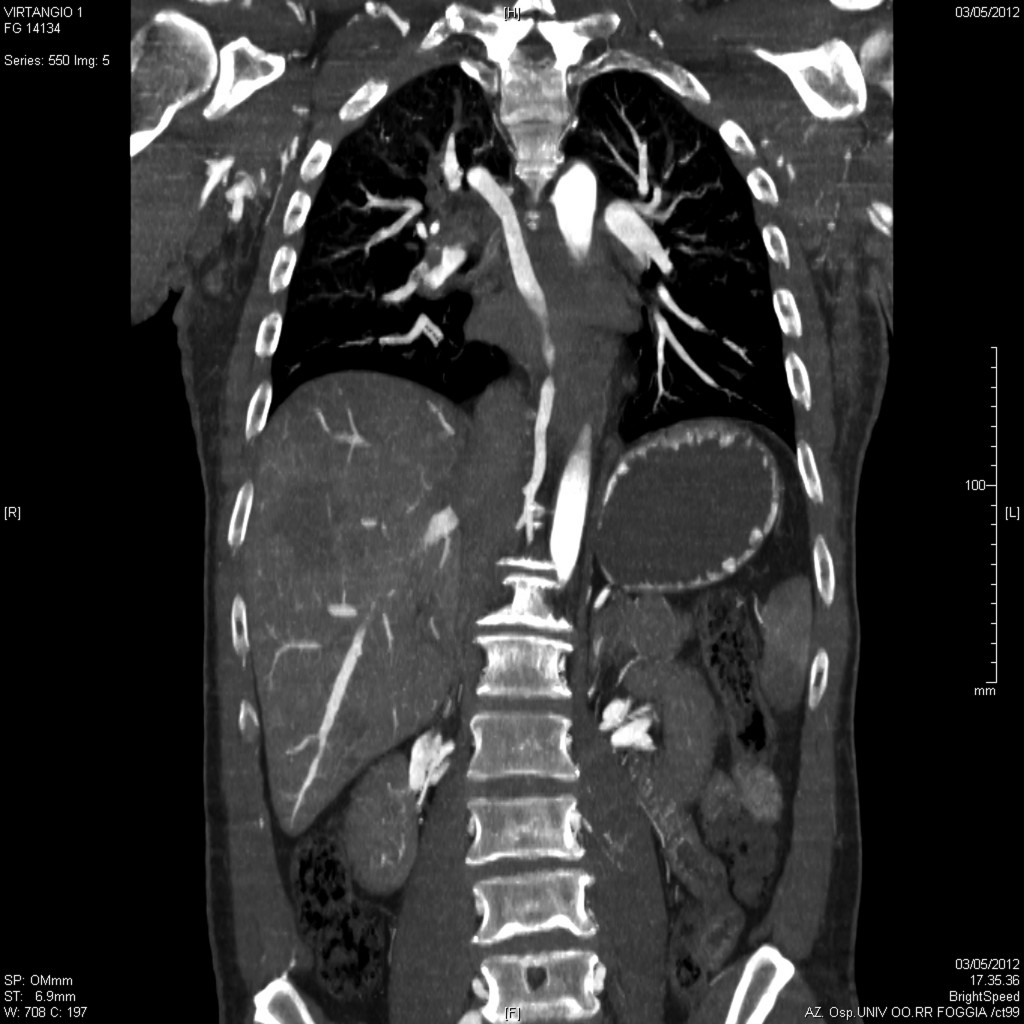 Based on post-mortem MDCT studies, a new approach called virtual anthropology has been developed. In cases of unidentified remains, positive identification of the deceased can be made by using comparative or reconstructive techniques to determine important anthropological information such as racial phenotype, age at death, sex and stature. More recently, MRI has been used to augment forensic investigations, particularly in musculoskeletal, cardiovascular and angiographic fields and in forensic imaging of the living, such as cases of child abuse, survived strangulation and age estimation, according to Guglielmi.

“At the moment, MRI is used for very few cases because it is more difficult to use on corpses than CT, but I am sure that forensic imaging will increasingly turn to MRI to answer certain questions. It is vital that we share more knowledge about forensic imaging in general, because there is a serious lack of awareness about it,” said Guglielmi.

“Very few radiologists are well informed about this subject and it is vital that the national and European societies bring more attention to the topic, because it represents a very real opportunity to extend our discipline. If we are not training in this area, providing personnel and taking charge of forensic imaging, then we run the risk that pathologists will move into this area and make reports by themselves without asking radiologists. With the excellent technological resources available and such an obvious opportunity for the growth of radiology, we have to make sure we don’t miss the chance, because this belongs to our field,” he added.