I have to admit that I’ve never been to an Islamic country before so I didn’t quite know what to expect and was quite curious about what the Iranian people and life in Iran would be like.

Arriving at Teheran airport is just like arriving at any other airport; a grim look at your passport and your visa and that’s it. With two cars we started our one-hour drive, along with our substantial cargo of ECR and ESR info material, to the Olympic Hotel Teheran where the annual congress of radiology was being held. One of the things that followed us throughout the whole week we stayed in Iran was the smog, even on the motorway at 04:30 am the air was filled with fumes which made a one-hour drive seem like a much longer journey. At the Olympic Hotel Teheran, which is located within a sports complex that includes the world’s fifth biggest football stadium, the air was much better and we could already see the first signs of congress preparations. The hotel is four-star with nice clean rooms and, being in the middle of a sports complex, offers a lot of fitness opportunities..

All the scientific talks and meetings were held in the main building while the technical exhibition was installed in two large tents next to the hotel, which made us worry a little bit because the outside temperature was above 30 degrees. Unfortunately, the ESR info booth was located in one of these tents but I have to say that you get used to the higher temperatures in Iran quite well.

Our colleagues from the ISR, who we had the pleasure of sharing our booth with, took good care of us and supplied us with enough water to cope comfortably with the heat. 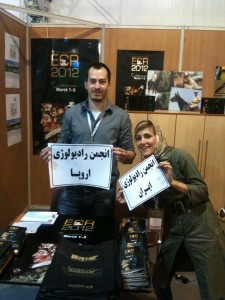 This is just one example of the great Iranian hospitality that was shown to us during the whole week and made us feel very welcome. Iranian people where anxious to help us in any way they could and were always concerned about our well-being.

The only problem we experienced during our stay at the ICR was that the Iranian customs bureau had some issues with our info material boxes, so that we had two wait for two days until we were able to give out the full range of material we brought to Iran. The congress attendees showed great interest in all of the ESR-related material, particularly in ECR and the Invest in the Youth programme. As usual, our original ‘Salzburger Mozartkugeln’, which is a special kind of Austrian sweet linked to Wolfgang Amadeus Mozart, were extremely popular among the congress guests. The technical exhibition was well visited throughout the whole week and all of the big companies, including GE, Philips and Toshiba, had a booth there. 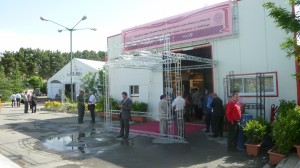 Unfortunately we didn’t have the time to visit the city but on our bus transfer to the presidential dinner, which was held at a hill-top restaurant, we got a good impression of how big and lively Teheran is. 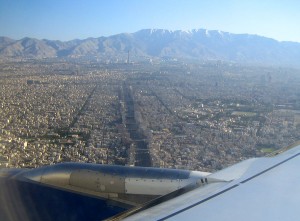 I have to say that I’m still deeply impressed by the great Iranian hospitality and how welcome the Iranian people made us feel. So if you ever have the chance or are thinking about attending the Iranian Congress of Radiology, I would recommend doing it because for us it was a very interesting experience and we will certainly go there again.