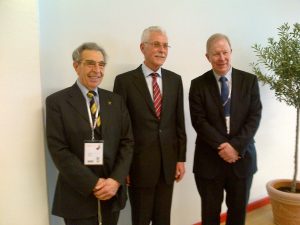 The ESR’s flagship journal, European Radiology, celebrated 25 years of publication in 2016. We spoke to Prof. Albert L. Baert, the journal’s Editor-in-Chief from 1995 to 2007, Prof. Adrian K. Dixon, who headed European Radiology from 2008 until 2013, and our current Editor-in-Chief, Prof. Maximilian F. Reiser. Together, they gave us a comprehensive account of the journal’s development during the last quarter of a century.

ECR Today: How have you seen the journal develop during the past 25 years?

Albert L. Baert: During this time period the number of published articles has increased spectacularly from 60 articles per year in the first issues to more than 400 per year now. For example, no less than 4,674 pages were published in 2016! European Radiology is now one of the most widely distributed and read scientific journals in the world. Simultaneously, the scientific level of the contents has improved steadily over the years as proven by the current excellent Impact Factor ranking.

Adrian K. Dixon: I was very lucky to take over when the difficult task of making it all electronic had already been achieved by Prof. Baert’s team in Leuven. Thereafter it was a case of personalising the electronic letters and getting to know the editorial team, the authors and the reviewers. There has been an increasing need to guarantee the authenticity/originality of articles and insisting on a named senior ‘guarantor’ for each paper.

Maximilian F. Reiser: Under the visionary leadership of Prof. Albert Baert and Prof. Adrian Dixon, European Radiology has made remarkable progress. It has claimed a position among the highest ranked journals in general radiology and has managed to considerably increase its attraction to imaging and interventional scientists all over the world.

The journal now represents the diverse and impressive range of our specialty, with all its sub-sections and areas, and has truly become global, in terms of papers submitted as well as people involved. Our Albert L. Baert Editorial Fellowship, giving one selected candidate the chance to look ‘behind the scenes’ of scientific publishing, has also proved very successful in my opinion. For 2017, we look forward to welcoming a radiologist from China.

ECRT: What were your greatest personal achievements during your time as Editor-in-Chief?

Albert L. Baert: When I took over as Editor-in-Chief in 1995, the journal had no Impact Factor. European Radiology was accepted onto the ranking list by the ISI institute in Washington in 1996 and the first IF was attributed for the year 1997. It was a modest 0.5601 but had increased to 3.651 by the end of my term in 2008.

Another decisive achievement for the development of the journal was the radical switch to electronic publication during the years 2004–2005. This mutation was realised successfully thanks to the enthusiastic collaboration of the editorial staff, the authors and the reviewers, but also due to the outstanding technical expertise of the Springer staff, headed by Dr. Ute Heilmann.

Adrian K. Dixon: Helping with the rise in the Impact Factor and speeding up the turnaround time for decisions and subsequent publication.

Maximilian F. Reiser: Over the last three years, the number of submissions has increased dramatically. While we are extremely happy that so many authors are interested in publishing in European Radiology, it also means an increased workload for the Editorial Office and the editors. This has presented us with many difficulties, but we have undertaken enormous efforts and managed to tackle this growing number of manuscripts. We were lucky enough to be able to recruit two excellent new Deputy Editors to our team, Dr. Sujal Desai from London, UK, and Prof. Jean-François Geschwind from New Haven, US. Prof. Rahel Kubik from Baden, Switzerland, Prof. José María García Santos from Murcia, Spain, und Prof. Peter Vock from Berne, Switzerland, continue to support me with their competence and expertise, which I am very grateful for.

ECRT: Which direction do you think the journal, and publishing in general, will take in the future?

Maximilian F. Reiser: With the introduction of European Radiology Experimental, our family of ESR journals has been supplemented in a very logical way. Insights into Imaging has developed wonderfully under the guidance of Prof. Robert Hermans, so that in the future, all three journals can best meet the individual demands of radiological scientists.

The proliferation of open access journals presents established scientific journals with a challenge; something that also concerns European Radiology. Our top priorities are to make sure that the quality of our published articles meets the highest scientific standards and that our readers can rely on the fact that all published manuscripts have undergone a strict independent and anonymous peer review process.

We should try to expand our interactive elements to further intensify the discussion with authors, reviewers and readers and increase our social media presence.

Adrian K. Dixon: Publication of research material will become even more immediate with open access for all. Indeed some journals may even make the review process itself ‘open’, thereby making it possible for experts to offer their opinion while the paper is still under review. Of course that would mean that submission would have to count as the start date for that research article in order to prevent others from ‘stealing’ the idea!

Albert L. Baert: As my colleagues mention, it is quite remarkable to notice that the end of printing scientific material on paper may be in sight due to electronic publication, which is now widely accepted by the scientific community. The increasing trend to ‘open access’ will certainly be another challenge for the future years!

Prof. Albert L. Baert is Emeritus Professor of Radiology at the Katholieke Universiteit (KU) Leuven, Belgium, and was Editor-in-Chief of European Radiology from 1995 to 2007.

Prof. Adrian K. Dixon is Emeritus Professor of Radiology at Cambridge University and an honorary consultant radiologist at Addenbrooke’s Hospital, Cambridge. He was Editor-in-Chief of European Radiology from 2008 to 2013.

Prof. Maximilian F. Reiser is the outgoing chair of the Ludwig Maximilians University’s department of radiology in Munich, and has been the Editor-in-Chief of European Radiology since 2014.