This year, the main theme of the International Day of Radiology is emergency radiology. To get some insight into the field, we spoke to Dr. Anton Nosov, MD, head of the radiology department at the Kyiv City Children’s Diagnostic Center in Kyiv, Ukraine

European Society of Radiology: Could you please describe the role of the radiologist in a typical emergency department in your country?
Anton Nosov: In our country, the role of a radiologist in the emergency department depends on situations outside of the hospital. Usually, radiologists are members of a multidisciplinary team, where they provide high quality, timely final readings for patients, which guarantees that decisions are made in consensus.
But everything changes in the case of extreme conditions, such as an unexpected military conflict (as we faced in eastern Ukraine) or other situations with enormous casualties (e.g. technogenic disasters or terrorist attacks). Such situations require rapid decision-making in conditions where there is a shortage of medical staff. In those cases, radiologists must draw quick conclusions directly from CTs or x-rays based on triage priority to ensure the survival of the most patients. This is a difficult job psychologically. 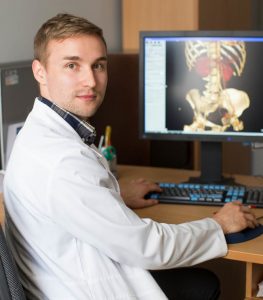 Anton Nosov, MD is a radiologist with a special clinical and research interest in emergency radiology.

ESR: What does a typical day in the emergency department look like for a radiologist?
AN: Of course, in the emergency department we face many cases every day, but the vast majority of them are trauma cases.
Trauma is a tremendous burden for hospitals and healthcare systems, affecting 135 million people worldwide annually. In Ukraine, the majority of these injuries are caused by motor-vehicle accidents, falls from heights and violent altercations.
The most pressing concern of any trauma team is stopping active haemorrhage, which is the most common cause of death in polytrauma patients.
Modern trauma management heavily relies on imaging, particularly CT scans. Most major centres now forego plain x-ray imaging in favour of diagnostic CT, which provides much higher sensitivity and can detect any active extravasation or bleeding. Our evidence suggests that well-timed use of CT increases the chance of survival in polytraumatised patients.

ESR: Teamwork is crucial in the emergency department. How is this accomplished in your department and who is involved?
AN: A multidisciplinary team is the only way to approach complex cases, such as polytrauma. We don’t have a fixed trauma team, but usually such a team consists of an anaesthesiologist, a radiologist, and a trauma surgeon or neurosurgeon. Trauma surgeons often serve as the case managers. The anaesthesiologist initiates ventilation of the patient; the radiologist interprets the imaging studies, and the trauma surgeon manages the case.

ESR: How satisfied are you with the workflow and your role in your department? How do you think it could be improved?
AN: Because our medical system, including radiology, is in the early phase of development, we lack the necessary financial support and structural changes that make workflow satisfactory.
To change this, Ukraine should establish the radiology subspecialty system that has been successful around the world for many years. Perhaps then an emergency radiology subspecialty will emerge. Also, we need legally approved, national radiology guidelines for patient management in emergency conditions. Finally, we should locate radiology services within the emergency department.

ESR: Which modalities are used for different emergencies? Could you please give an overview sorted by modalities?
AN: CT has emerged as the backbone of diagnosis in almost any emergency, and its use has steadily increased because of its wide range of applications, greater accuracy for diagnosis, and ready availability. In recent years, MRI also has been used more frequently to answer diagnostic questions in cases where CT is not effective or to clarify and expand upon the information provided by CT. Of course, radiographs remain the most frequently performed emergency imaging study in Ukraine clinics because of their availability and affordability. Sonograms are helpful, especially in obstetric and paediatric practice or any autonomic conditions outside the hospital (e.g. an ambulance). Nuclear-medicine studies typically are not used for emergencies in Ukraine.

ESR: Is teleradiology an issue in emergency radiology? If yes, how so, and how often is it used?
AN: Teleradiology in the emergency room is commonly used for overnight cases. Images are sent to an on-call radiologist to read and diagnose in consultation with emergency physicians. Also, there are radiologists on duty to read a fully remote image study. In both cases, the radiologist is always available, in real time, by phone for discussion and consultation with the treating emergency physician.

Anton Nosov, MD is a radiologist with a special clinical and research interest in emergency radiology. During the conflict in eastern Ukraine in 2014-15, he successfully developed the emergency military radiology unit at Camp Schastya in eastern Ukraine. As a Red Cross volunteer, he provided radiologic support in a mobile army surgical hospital (MASH). He implemented a system of hybrid radiological sorting of the wounded based on the principles of triage priority during the mass arrival of casualties. Also, he developed the procedure for intraoperative radiological support of surgical interventions for multifragmented mine and shrapnel wounds under digital x-ray and ultrasound control in field-hospital conditions. He has authored many publications on the topic of military emergency radiology.
Today, Dr. Nosov is the head of the radiology department at the Kyiv City Children’s Diagnostic Center in Kyiv, Ukraine, which provides emergency and planned care for patients, as well as patients injured during the hostilities. Dr. Nosov hopes that military emergency radiology tactics might be applied in Ukraine to create a strong backbone for the emergency-room subspecialty.