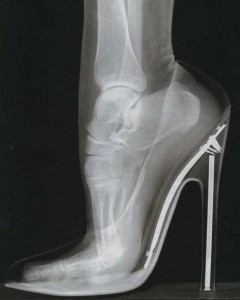 Shoe fitting fluoroscopes, also known as pedoscopes in the UK, were apparently a common thing to find in shoe shops between the 1920s and 1960s. They are best described as a wooden device with an opening at the bottom in which feet could be placed, and one to three openings at the top to get a look at the feet below. It allowed the customer’s feet to be visualised inside the shoes to ensure they found the best fitting shoes. 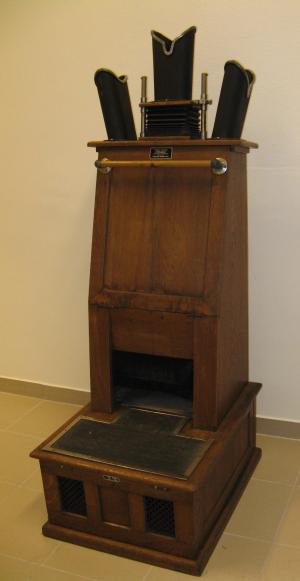 While there are various stories and rumours about the device’s origin it’s quite obvious that it was not brought invented for the benefit of the health of the customers’ feet, but rather to push shoe sales by dazzling the customer with science.

The pitch of many salesmen was that the pedoscope allowed them to sell better fitting shoes and that it would be more fun for kids to go to the shoe shop. In times of economic crisis such ‘x-ray measurement’ technology also helped to reassure the customer they would be buying longer lasting footwear.

When you consider the fact that all these advantages could also have been achieved by much simpler means, the pedoscope seems to be little more than a non-medical gimmick.

Later, the biggest concern of many health organisations and doctors was the radiation exposure, which was way out of proportion with the device’s benefits. The measurements reported by different authors are consistently between 12 to 107 R per minute (0.1 to 1 Gy per minute)¹ . 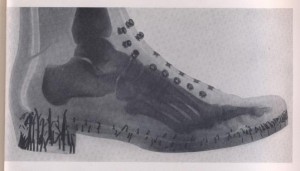 Despite these high radiation rates there are no reports of injured shoe shoppers, but that sadly can’t be said for the salesmen who often had their hands inside the pedoscope to adjust the shoes. There is also one report about a shoe model’s leg that had to be amputated due to a serious radiation burn inflicted while using the device.

In the early 1950s regulations for the use of pedoscopes were established and tightened in the US, for example a trained physiotherapist was needed to operate the device, and this then led, together with the increasing pressure from various insurance companies, to the demise of the pedoscope in the late 1950s.

If you are interested in more details about the pedoscope check out this article that was published in ‘California medicine’ in January, 1950.