The ECR represents a unique mixture of tradition, innovation and entertainment. Every year the Congress Committee and the ESR Office try to introduce some innovations to attendees. Some of these innovations are quite big and remarkable, others could be quite small and almost invisible. For example, let’s look back and recall the history of the Electronic Poster Online System (EPOS) at the ECR. In 2003, when EPOS was born and launched for the first time, there were some sceptics saying that it was a step back compared to sessions with traditional paper posters. But EPOS turned out to be extremely successful. Today we cannot imagine the ECR without EPOS. And after more than 10 years of EPOS, we consider it a unique online scientific and educational database. Seeing this success, other medical congresses have started to follow the new standard of poster presentations established by the ECR. 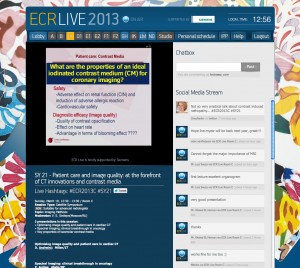 ECR Live enabled viewers to stream more than 1400 lectures from ECR 2013 and discuss them via the integrated social media wall and chat function. For ECR 2014, the service will be extended to cover every lecture room.

Today it looks like another new big project of our congress, ECR Live, is going to set another new trend in medical congresses. This project was launched at ECR 2012 but covering just selected sessions, and then expanded in 2013, the success of which was beyond expectations.

This year it is going to be improved and expanded further. It means that almost all sessions will be broadcast via the internet in real-time. Further more, each of the broadcast sessions will be recorded and made available via the ESR website, not only during the congress, but also later on. It means that our society’s website is going to offer a video on demand service for its visitors. It is extremely useful both to the participants of the congress (one can see and hear presentations from any lecture room of the Austria Center Vienna) and to the ESR members or anyone else who is interested but who is unable to attend the annual meeting. They can now participate in the congress virtually. And of course, the recordings of ECR Live (similarly to EPOS) will make up a unique and valuable educational resource.

Thanks to the ECR Social Media Wall, which is now a fully integrated part of ECR Live, all aspects of the congress will be vividly and instantly reflected and discussed on the web, using Twitter, Facebook, Instagram and other social media networks. The Social Media Wall merges all ESR-related social media channels into one aggregated stream of updates and messages. It can be accessed via your browser using PC, tablets, smartphones and any other kind of handheld computer device.

For participants of the congress, the Social Media Wall has become very popular as a real-time support and information channel. Experiences at the two previous congresses have shown that the Social Media Wall was used for various different reasons, such as to find information about the ECR programme, to discuss social topics, to provide positive and critical feedback about presentations, and for direct communication between users (including company representatives). The most popular social media channel was Twitter, of which I am personally a fan (feel free to follow me at @val_sin).

I hope that all participants at ECR 2014 will fully enjoy these great innovations of the which are going to be an indispensable part of this and future annual meetings. Besides this, for the first time ECR 2014 will feature a session (which I hope will be of special interest for our younger colleagues) highlighting the role of Social Media in Radiology (PC 11).