A short preview of lecture A-458 ‘B. Pulmonary’, from the session E³ 1520 ‘Thoracic emergencies’ at ECR 2014, given by C.M. Schaefer-Prokop from Amersfoort, Netherlands. Watch the whole lecture and many more at http://ipp.myESR.org Direct link: http://bit.ly/Thoracic_emergencies

Abstract: Acute respiratory failure can have multiple underlying causes including infection, fluid overload, immunological diseases or exacerbation of preexisting lung disease. Since the clinical symptoms are nonspecific, imaging plays an important role. The first imaging method is mostly the chest radiograph, easy to access and to obtain, but non-diagnostic in many cases. (HR)CT offers more possibilities to define the differential diagnosis. The option of this interactive workshop will be to get familiar with the spectrum of diseases that can cause acute respiratory failure and learn about key findings in radiography as well as CT to reduce the differential diagnosis. The interaction between preexisting lung disease, clinical information (e.g. chemotherapy, rheumatoid arthritis, COPD) and imaging findings will be discussed using clinical case studies. Options and also limitations of imaging findings will be illustrated. The following scenarios will be taken into account: acute cardiac failure and various appearances of oedema; acute immunological-toxic disorders including drug-induced lung disease and inhalational injuries; exacerbations of preexisting lung disease including fibrotic and obstructive lung disorders; severe infections causing respiratory failure and their complications.

A short preview of lecture A-158 ‘Connectomics in brain pathology’, from the session NH 7 ‘The human connectome: a comprehensive map of brain connections’ at ECR 2014, given by M.P. van den Heuvel from Utrecht, Netherlands.

Watch the whole lecture and many more at http://ipp.myESR.org
Direct link: http://bit.ly/The_human_connectome

Healthy brain function depends on efficient functional communication within a complex network of structural neural connections, a network known as the connectome. Conversely, damage to the brain’s network, disrupting local neuronal processes and/or global communication between remote functional systems may lead to brain dysfunction. In the last few years, emerging evidence from a wide variety of studies suggests that connectome abnormalities may indeed play an important role in the aetiology of several brain disorders. In my talk, I will discuss the results of recent studies suggesting an important role for affected connectome organization in a number of neurological and psychiatric disorders. In particular, I will highlight the findings of affected functional and structural brain network in neurodegenerative disorders such as Alzheimers and ALS, as well as discuss how the application of network science and connectomics may aid our understanding of the biological basis of psychiatric disorders such as autism and schizophrenia.

In the build up to ECR 2014, we will be showcasing a few of the optical illusions cases which will be presented in the interlude of ECR 2014’s new Case-based Diagnosis Training session. Our first case, below, was submitted by Dutch neuroradiologist, Dr. A. A. Jacobi-Postma. The picture shows a patient with a non-functioning macro-adenoma, but it looks a little like something else.

What do you see? Leave your illusion interpretation as a comment. 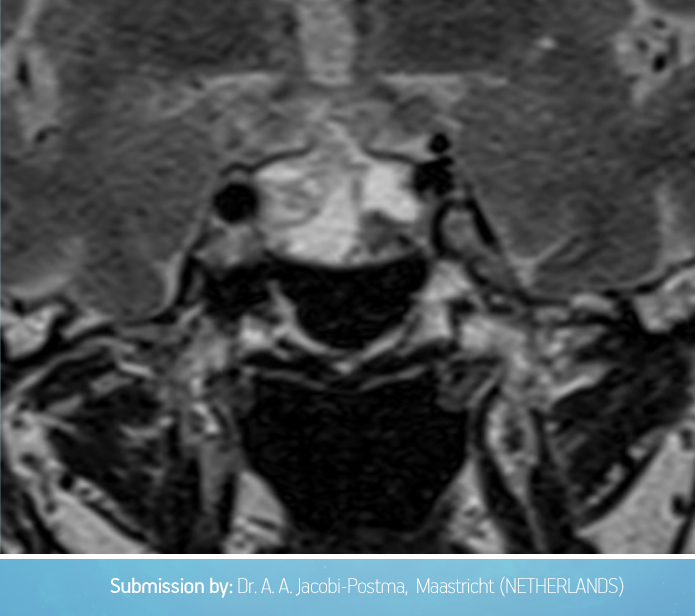 Stop by the session at the congress on Monday, March 10, or come back to the blog in a few days to see if your interpretation matches Dr. Jacobi-Postma’s.

Welcome to all ECR 2014 presenters 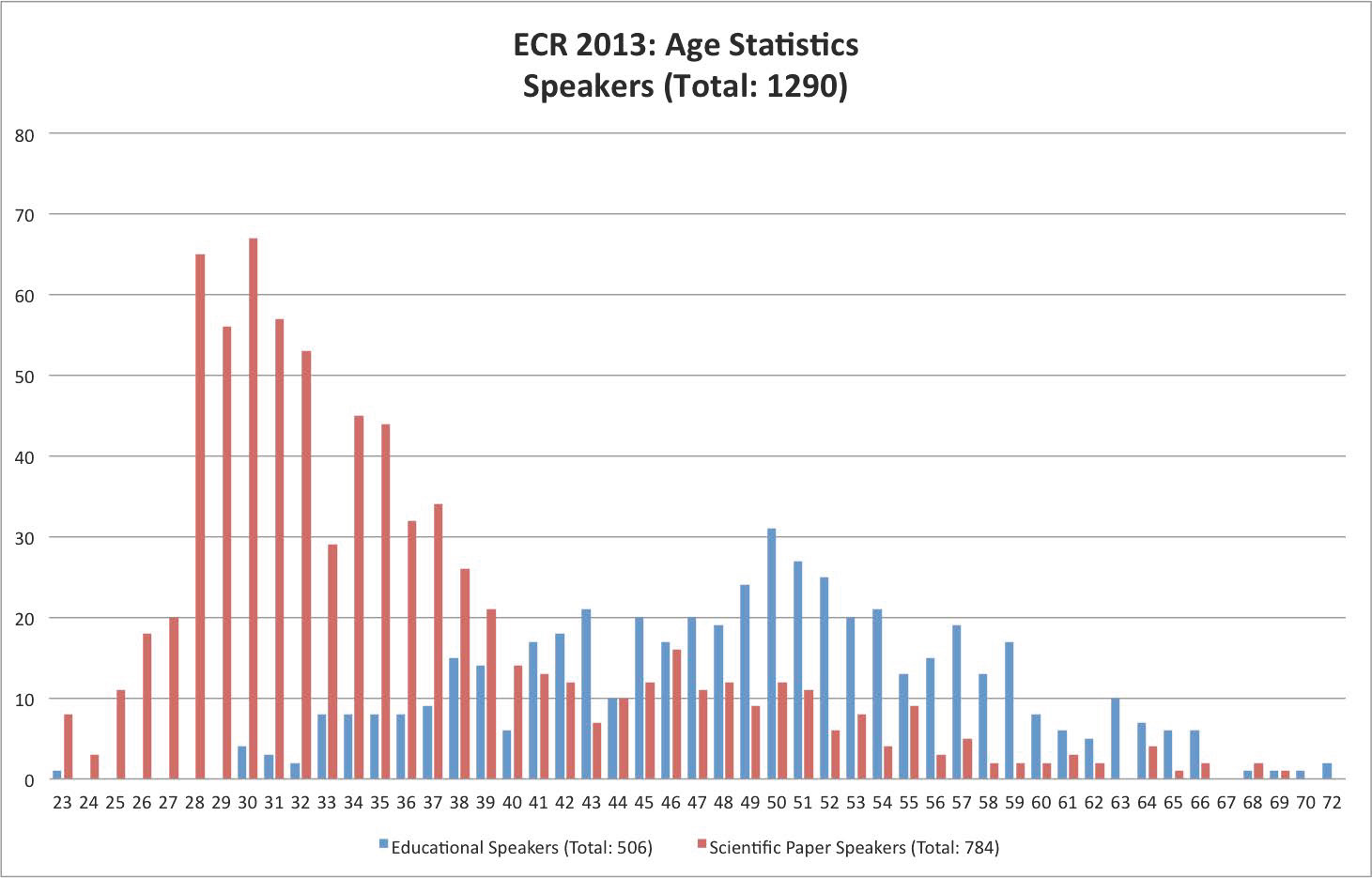 The ECR represents a unique mixture of tradition, innovation and entertainment. Every year the Congress Committee and the ESR Office try to introduce some innovations to attendees. Some of these innovations are quite big and remarkable, others could be quite small and almost invisible. For example, let’s look back and recall the history of the Electronic Poster Online System (EPOS) at the ECR. In 2003, when EPOS was born and launched for the first time, there were some sceptics saying that it was a step back compared to sessions with traditional paper posters. But EPOS turned out to be extremely successful. Today we cannot imagine the ECR without EPOS. And after more than 10 years of EPOS, we consider it a unique online scientific and educational database. Seeing this success, other medical congresses have started to follow the new standard of poster presentations established by the ECR.

END_OF_DOCUMENT_TOKEN_TO_BE_REPLACED

It is now just a few weeks until ECR 2014. As congress president, I am very much looking forward to welcoming you to this meeting, which will take place on March 6-10 in Vienna, Austria. Every ECR that I have attended has been a unique and unforgettable event and I am absolutely sure that ECR 2014 is going to continue this brilliant chain of outstanding meetings. I am also very proud that ECR 2014 is a jubilee meeting – it is the 20th congress in the modern history of the event, counting from the pivotal year of 1991 when it was completely re-designed and held for the first time in Vienna.

END_OF_DOCUMENT_TOKEN_TO_BE_REPLACED 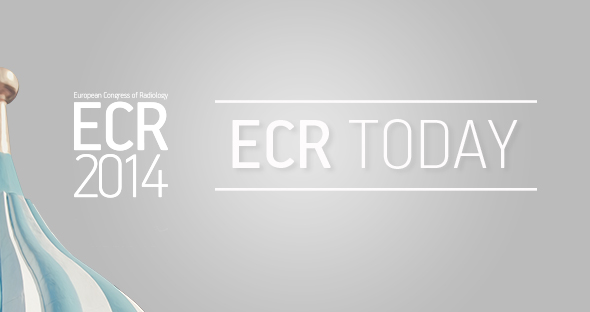 At each ECR since 2008, the ‘ESR meets’ programme has included a partner discipline along with the three guest countries, as a way to build formal bridges between the European Society of Radiology (ESR) and other branches of medicine, and to give congress participants an opportunity to learn about something a little different. At ECR 2014 the programme includes a visit from undoubtedly the largest medical discipline to take part in the initiative so far: cardiology, represented by one of the biggest medical societies in Europe, the European Society of Cardiology (ESC). Cardiology has much in common with radiology, but this is the first time that the two European societies have come together for an official joint session at a major meeting.

Despite some well-known points of controversy between the two disciplines, concerning professional ‘turf’, the overriding message during this afternoon’s ‘ESR meets ESC’ session will be one of cooperation and mutual understanding. Prof. Panos Vardas, president of the European Society of Cardiology, who will co-preside at the session, believes that the blurring of borders between subspecialties makes this kind of exchange of knowledge a must.

END_OF_DOCUMENT_TOKEN_TO_BE_REPLACED

This year the European Society of Radiology (ESR) will again invite three national radiological societies and a partner discipline to take part in the popular ‘ESR meets’ programme during its annual meeting, the European Congress of Radiology (ECR). Delegations from Russia, home country of ECR 2014 President, Professor Valentin Sinitsyn, Mexico and Serbia will present their latest achievements in imaging. The European Society of Cardiology (ESC) will focus on the cooperation between cardiologists and radiologists in the field of cardiac imaging. The European Federation of Radiographers Societies (EFRS) will also take part in joint sessions with Russian radiographers, to stress the role of this important partner discipline.

END_OF_DOCUMENT_TOKEN_TO_BE_REPLACED

As every year, the ESR presidency changed hands at the European Congress of Radiology in March, with the new president, Prof. Guy Frija, from Paris, taking the reins from Prof. Gabriel P. Krestin. At the same time, the ECR 2014 Congress President, Prof. Valentin E. Sinitsyn, from Moscow, took over from Prof. José I. Bilbao as chairman of the Congress Committee.

In addition to these regular changes, a number of other positions on the Executive Council have been filled by new faces. First, Prof. Bernd Hamm, from Berlin, has moved up the chain into Prof. Sinitsyn’s position as 1st Vice-Chairperson of the Congress Committee, with Prof. Katrine Åhlström Riklund, from Umea, Sweden, elected to the role of 2nd Vice-Chairperson.
END_OF_DOCUMENT_TOKEN_TO_BE_REPLACED

Next year’s ECR set to be Russian Affair 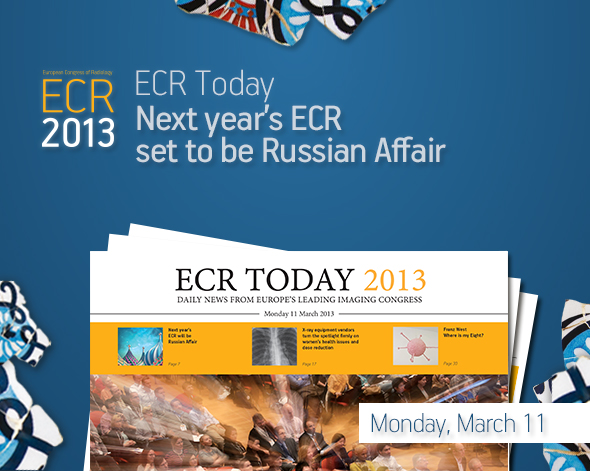 ECR Today spoke with the next ECR president, Prof. Valentin Sinitsyn. He is chief of the radiology department at the Federal Centre of Medicine and Rehabilitation in Moscow, Russia, and currently serves as president of the European Society of Cardiac Radiology (ESCR).

ECRT: What will be the main highlights of ECR 2014’s scientific programme?

Valentin Sinitsyn: Prepare for more interactivity. People are increasingly interested in interactive sessions to assess what they have learned from a lecture. The ECR has been developing interactive sessions for several years now, but we want to increase that. Today, you can find a lot of information on the internet and many people might not think it is necessary to travel to a congress. We want to create something attractive and show that it is worth coming here. Nothing can replace shaking hands with your colleagues from other countries. I would be very sad if the ECR were entirely online. This is why we are making live meetings more interactive. 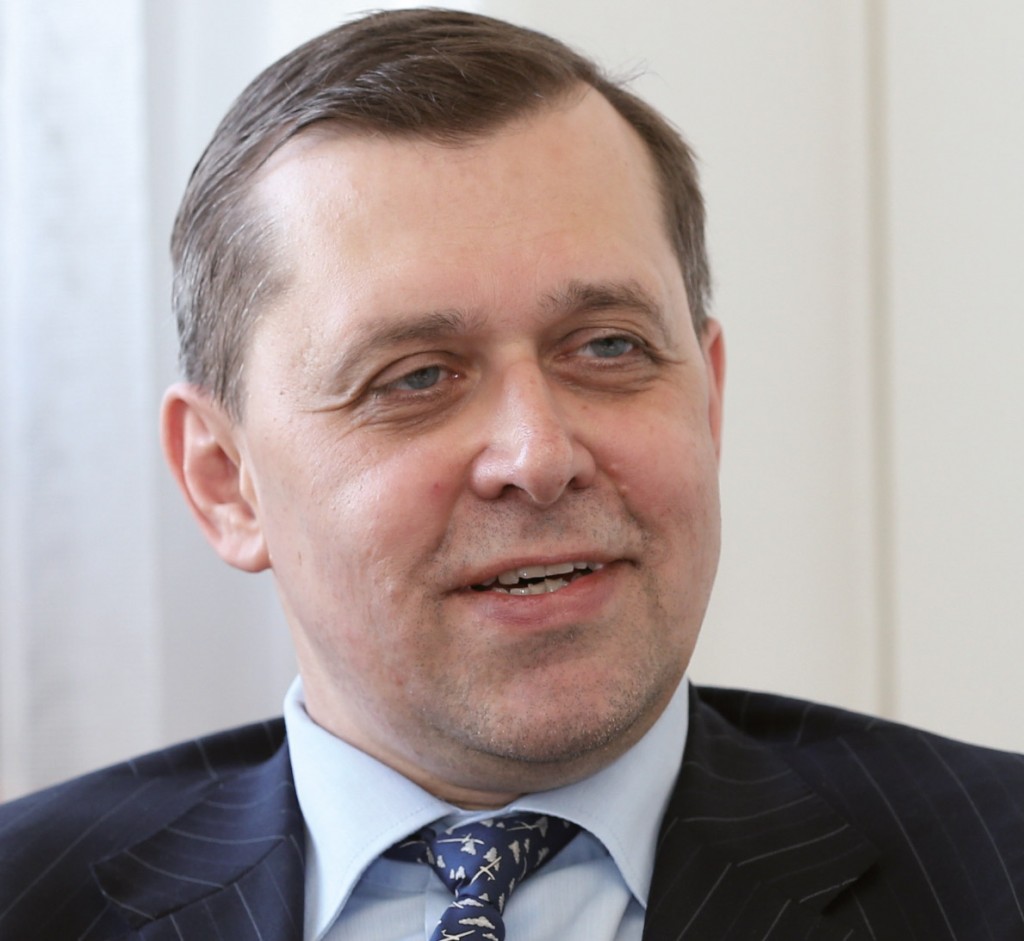 We would also like to change the format of scientific sessions. Our lectures have the same format they had one or two hundred years ago: a stage and an auditorium. We are currently discussing the concept of a multimedia classroom, a model which was successfully introduced during the last SIRM congress in June 2012. This multimedia classroom offered 60 work stations from different companies with 25 different cases which were discussed at the end. We are currently discussing the structure with Professor E. Neri from Pisa, who was responsible for the scientific programme of that project.

Soon we are going to use smart phones for voting during audience response sessions. But wireless technology has its limits and sometimes networks crash, so it needs a lot of work. Keypads are an old technology but they are very reliable. I am sure that next year, or the year after that, everybody will be able to vote with their own iPads or tablets.

We will also increase the number of multidisciplinary sessions. This is not something we have to do just during the ECR. This year we had the Imaging Biomarker’s Course the day before the congress, which was organised by the European School of Radiology. This will take place again next year with radiation oncology as the topic.