Euro-BioImaging will become a pan-European research infrastructure for biomedical imaging technologies. The project’s initial preparatory phase aiming at the development of the technical, legal, governmental and framework of Euro-BioImaging will end in mid-2014. 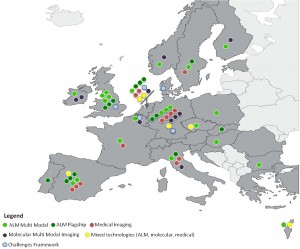 The results of the first Open call for Nodes

During the last year of the preparatory phase, Euro-BioImaging successfully carried out the first call for Nodes and finalised plans for its infrastructure model and user access policies.

The results of the first open call generated much interest among potential users, with over 2,200 submitted project proposals, a positive indication that the European imaging community would make use of the service provided by Euro-BioImaging. All expressions of interest were reviewed by an independent international evaluation board, comprising some of the world’s best imaging scientists. Euro-BioImaging’s first open call was a great success, and it is promising to see that so many European imaging facilities are ready
to provide open access to external users.

In November 2013, Euro-BioImaging brought together more than 200 of its 1,500 stakeholders in Heidelberg, Germany. The meeting provided the platform for a productive discussion about the Euro-BioImaging infrastructure model, the establishment of Nodes and future operation. Stakeholders also expressed their unanimous support for the project.

Eleven interested member states and the European Molecular Biology Laboratory (EMBL) have already signed a memorandum of understanding (MoU), stating their intent to take the necessary steps towards the construction and operation of Euro-BioImaging and facilitating continued discussions during the transition phase. Members of this group also expressed their interest in relying on the experience of the Euro-BioImaging Preparatory Phase Project Management Team for bringing Euro-BioImaging into operation.

Looking ahead in 2014, the Interim Board will work together towards the realisation of the legal model for Euro-BioImaging, the determination and integration of future Nodes, and the revision and adoption of the financial plan. One of the most exciting upcoming tasks will be the identification of the country that will host the Hub of Euro-BioImaging. Criteria and procedures are currently being formulated by member state representatives.

The large number of countries that have put Euro-BioImaging high on the national research infrastructure roadmap and shown interest in signing the MoU is an encouraging sign for Euro-BioImaging. Furthermore, the investment in medical and biological imaging research infrastructure already made within the EU member states guarantees their commitment to the field of imaging.