The future status and development of the radiological profession look set to come under the microscope today during the eagerly anticipated ‘ESR meets Italy’ session. The major challenges ahead, including artificial intelligence (AI) and machine learning, are to be addressed by expert speakers.

“We feel that we have to be able to drive AI and not be driven by it. The Italian way of thinking may help our community to fight to ensure that AI does not supersede the human elements of care,” Dr. Corrado Bibbolino, head of the Forensic and Ethical Section of the Italian Society of Medical Radiology (SIRM), told ECR Today ahead of ECR 2019. 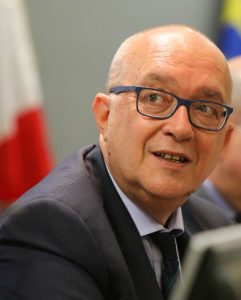 Dr. Corrado Bibbolino is a board member of the Italian branch of Choosing Wisely.

He fears AI may take over the role of the radiologist, and the personal aspects and skills may be lost.

“Patients may think that they are satisfied with AI, but it is not the same as dealing with a real person – it’s not like an automatic ticket machine in a railway station,” Bibbolino said. “Human characteristics like empathy and intuition are not there. A computer might resolve a problem, but it cannot ask the patient questions, feel the reaction, look into the patient’s eyes and think what the patient is thinking – these are things AI cannot do. This is the difference between a human and a robot. AI is important but it is not a substitute for a real radiologist.”

Bibbolino is a long-standing member of the Italian radiology community, having been active in healthcare policy and education for around 40 years. He contributed to the development of national guidelines for radiology practice, including the regulation of teleradiology, and his influence and leadership have led to the establishment of recent Italian laws on healthcare security, professional liability, and insurance reimbursement.

In today’s presentation, ‘Radiology in Italy’, of particular note and relevance will be his work with ‘Choosing Wisely’, which aims to promote dialogue around avoiding unnecessary medical tests and treatments. The initiative is involved with the so-called slow medicine movement, and focuses on a thoughtful, deliberate approach to patient care.

“A radiologist should be near the patient, not only exist as an invisible figure,” said Bibbolino. “This is a typical and defining feature of radiology practice in Italy, which differs distinctly from countries where the radiologist and the patient are often located in separate rooms.”

Unlike some other European countries, Italian radiologists carry out ultrasound examinations themselves and report to the patient immediately afterwards, he explained. In other parts of Europe, sonographers or technicians carry out the ultrasound scan and often a patient does not get to meet the radiologist at all. “We feel it is important to be close to our patients, to understand their condition and deal directly with them, not through intermediaries,” he emphasised.

Bibbolino went on to say that, in Italy, particular attention is paid to risk management for both patients and staff. Thanks to legislation that came into effect in late 2017, called the Gelli law, the safety of examinations, treatment and professional liability have become even more important issues. 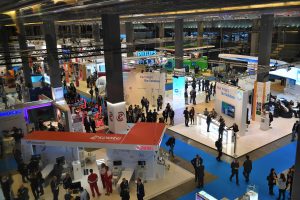 Mostra Técnica: exhibitions held in Italy provide a shop window for new equipment and services, including those for artificial intelligence and machine learning.

According to data from the Organisation for Economic Co-operation and Development, Italian radiology runs more than 2,000 CT and 1,715 MRI scanners, of which only 30% are less than five years old. Bibbolino noted that a recent SIRM survey found that approximately 120,000,000 x-ray, ultrasound, CT, MRI and interventional radiology examinations are performed in Italy annually.

“With all these examinations, there is a problem with appropriateness and overdiagnosis. Some medical problems don’t need imaging; for example, MRI of the lumbar spine isn’t always necessary,” he said. “In some countries, patients can wait for two to three months for imaging, but here in Italy, patients can have MRI after a few days.”

Also speaking during the same session will be Dr. Vittorio Miele, head of imaging at the Careggi University Hospital in Florence and President Elect of SIRM 2019. He will discuss the Italian Emergency Network. Requests for emergency diagnostic and therapeutic services are constantly growing, due to both clinical and epidemiological factors, and this is due to the increasing amount of traumatic events and non-traumatic clinical emergencies.

“There’s overcrowding of the emergency system because patients with minor health problems attend due to a lack of immediate response in the non-emergency system,” he said.

Miele pointed out that the majority of patients accessing emergency care have at least one diagnostic examination to determine the care path. “Twenty-four-hour radiology staffing greatly influences the diagnostic performance of a department. Also, rethinking the logistics of emergency departments would help make patient transfers easier, and we need to ensure that the equipment is optimised for emergency patient care.”

There is a need to iron out differences between regions, and to ensure the proper distribution of resources nationally, he added.

» La Radiologia Medica: the role of the journal in an international setting
Giovagnoni; Ancona/IT

» Panel discussion: How will the radiologists’ profession evolve?

7 Responses to : Radiology in Italy takes centre stage on day three of ECR 2019