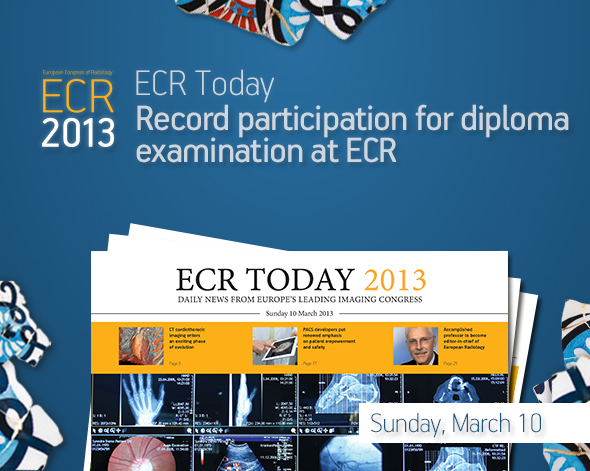 The increasingly popular European Diploma in Radiology (EDiR) attracted a record number of candidates from all over the world to the ECR. As many as 62 residents and radiologists travelled to Vienna to sit the examination, a 50% increase in participation from last year.

This rise reflects the growing quality and recognition of the diploma, according to Dr. Éamann Breatnach from Dublin, scientific director of the European Board of Radiology (EBR), which organises the examination. “People start to see that the diploma is a qualification agreed to by both the EBR and the European Society of Radiology (ESR). There is more recognition of the value of the diploma, which people see as useful for their individual career paths. Holding the diploma shows your employer that you are enthusiastic and have a good knowledge base, and ultimately you can use it to look for employment elsewhere,” he said. 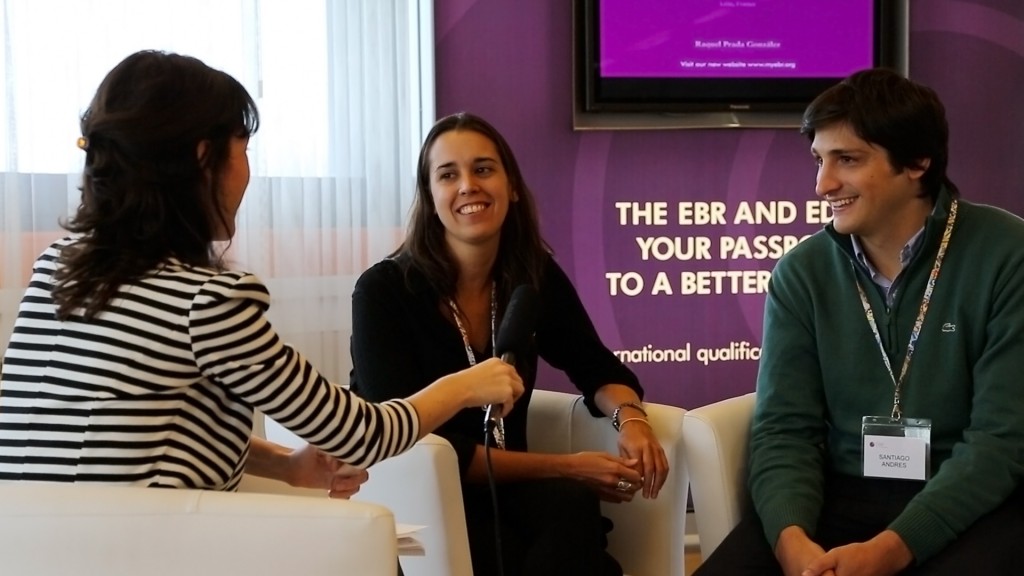 Mariana Jakubowicz and Santiago Andrés from Buenos Aires, Argentina, were amongst the candidates at the European Diploma in Radiology exams which took place Wednesday to Friday during the ECR.

The diploma is officially recognised by the European Union of Medical Specialists (UEMS), and its reputation extends well beyond Europe. Candidates from the Gulf countries have come in large numbers since the introduction of the diploma two years ago, and Americans are beginning to show an interest as well. Furthermore, the Argentine Society of Radiology paid for two young radiologists to take the diploma exam, and covered their travel and accommodation costs. Dr. Mariana Jakubowicz and Dr. Santiago Andrés, residents at the Deutsches Hospital in Buenos Aires, found it to be a great experience and acknowledged the quality of the examination.

“The exam really covered every aspect of general radiology. The written part was tough. There were lots of questions and little time to answer them. Cases were not the simplest. The examination was challenging because of the language, but I know the examiners take that into account. I felt more comfortable during the oral exam though and could comment on the images. Besides, the examiners were very friendly and helpful,” Andrés said.

“One difficulty is that we do things differently back home. For instance I would never do an MR examination for appendicitis but rather an ultrasound or abdominal CT scan, so I am not used to seeing this pathology on MRI. That was a bit confusing. But having a mock exam beforehand could help in this regard,” said Jakubowicz, who confirmed the huge interest among young Argentinean radiologists in working abroad.

Andrés and Jakubowicz also presented papers through EPOS™ – on mammography, usual metastatic sites in PET, whole-body PET-CT examination and on the selection of biopsy sites with PET-CT. Part of the reason why they took the exam in Vienna was so they could also attend the ECR, and diploma candidates were given free access to the congress this year. Conveniently, the examination started a day before the beginning of the ECR, to enable candidates to attend sessions afterwards. Furthermore, the examination was split over three days, sparing candidates long waiting times between the written and oral tests.

This time, diploma organisers invited a panel of observers to attend the orals, in order to train them to become examiners next year. Organisers also announced that they would include a list of recommended literature for the next examination, after candidates requested this option.

“We would like to encourage people to be familiar with the ESR publications, which include the publication on the revised training charter and curriculum, the journals European Radiology and Insights into imaging, and the case material available on Eurorad. But this list is not exclusive and we are aware that there are very good books in languages other than English, so I want to stress that point, and also insist on the European nature of this examination, which is not a language test,” Breatnach said.

In the future, organisers would like to see the diploma become accepted as equivalent to some national qualifications, and negotiations are currently underway.
The examination will also be held during the annual meeting of the Turkish Society of Radiology in November. Candidates will have the option of taking the oral test either in English or in the local language.

Success in the examination will certify a standard of radiological knowledge deemed appropriate by the ESR for independent practise in general radiology. The examination is open to radiologists and radiology residents in their fifth year of training. Examination costs are €500 for ESR full members and members in training, and €1,100 for ESR corresponding members.