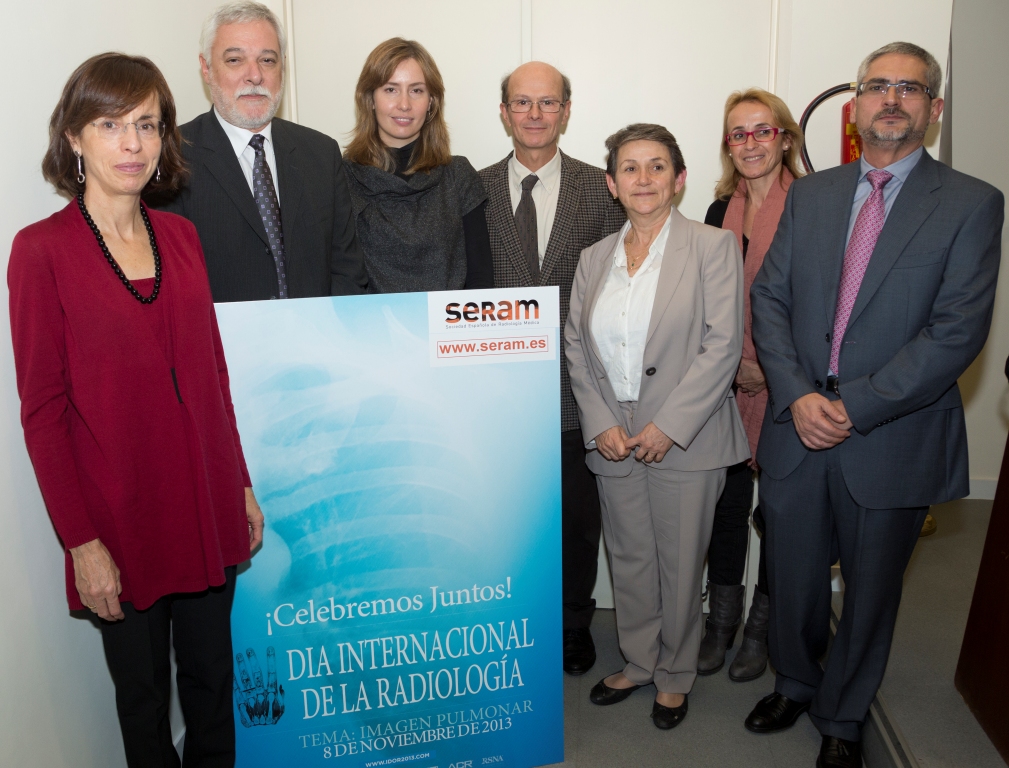 Dr. Joaquín Ferreirós Domínguez, a radiologist at the Hospital Clínico San Carlos, Madrid, and president of the Spanish Society of Cardiothoracic Imaging, explained to the audience how to fight what he called “the invisibility of the thoracic radiologist”. Increasing communication with the patients and all the specialists involved in lung disease management is key, he said. He thanked his colleagues who have been striving to do just that since the 1960s, including Prof. José Cáceres, Chief of Diagnostic Radiology at H.G.U. Vall d’Hebron Universidad Autónoma, Barcelona, one of this blog’s biggest stars.

Speakers were also keen to show how imaging plays a central role in the management of many lung diseases. Dr. Jesús de la Torre Fernández, from the University General Hospital Gregorio Marañón, Madrid, highlighted the importance of radiology not only in diagnosis and detection, but also in monitoring treatment and follow-up of lung cancer. Doctor Eva Castañer González, from the Corporació Sanitaria Parc Taulí, Sabadell, and Doctor Inmaculada Herráez Ortega, from the Complejo Asistencial Universitario, León, also stressed the role of the thoracic radiologist in pulmonary hypertension and chronic pulmonary disease, respectively.

Last but not least, Elena Serrano from the Idiopathic and Familial Pulmonary Fibrosis Relatives and Patients Association (AFEFPI), focused on the patient’s perspective and the importance of the radiologist in early detection, diagnosis and follow-up. She insisted on the necessity for radiologists to train adequately to recognise pulmonary fibrosis, a rare but serious condition, which easily goes unnoticed.

“Pulmonary fibrosis is often mistaken for pneumonia or infection, so it is very important that radiologists be adequately trained and know about this disease, to be able to help diagnose it correctly. Radiological images are essential for the diagnosis of the disease, and early detection enables treatment, which in turn improves patient prognosis,” she said.

Patient representatives made a useful contribution to IDoR this year. European patient organisations were involved in the creation of a book on thoracic imaging written by the ESR and members of the European Society of Thoracic Imaging (ESTI). This new collaboration reflects the ESR’s increasing focus on working for the benefit of the public, according to the organisers.

“I want to thank everybody involved in the organisation of IDoR. Participation from patient organisations improved from last year and this is a significant progress. Good work!” said SERAM president, Prof. Carmen Ayuso, from Barcelona.

The number of societies participating also noticeably increased, by 37.5 percent from 2012. All of the ESR’s European Subspecialty & Allied Sciences societies took part in the event, plus 12 societies from South America and 9 from Asia also joined in the celebrations.