Nahum Goldberg is full professor of radiology at Hadassah Hebrew University, Jerusalem, Israel and visiting professor of radiology at Harvard Medical School, Boston, MA. He is a worldwide expert in image-guided tumour therapy, a field he has helped pioneer and continues to advance. He will share some of the latest results on the effects of these therapies, both positive and negative, today during the Josef Lissner Honorary Lecture.

Image-guided therapy and transcatheter intervention work best on small tumours in the liver, kidney and several other organs, evidence over the past two decades has showed. That was the birth of interventional oncology and it held exciting promise for the (radical) improvement of cancer treatment. Based on that knowledge and promise, many researchers have worked towards combining these procedures with more conventional cancer therapies like chemotherapy and radiation to increase the size and range of the population that can be treated. 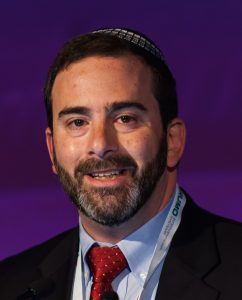 Prof. S. Nahum Goldberg from Jerusalem will share some of the latest results on the effects of image-guided tumour therapy, during the Honorary Lecture today at 12:15.

One of the underlined premises of interventional therapies is that using imaging to guide a procedure is less invasive than using other methods like surgery. Despite this and other advantages that have led to ablation systems and techniques now being used clinically more than 100,000 times annually, things have not always gone as planned, according to Goldberg, who heads the interventional oncology unit at Hadassah Medical Centre.

“Specifically, for much of the last two decades, we have argued that other benefits of these interventional oncologic therapies, including percutaneous tumour ablation and chemoembolisation, were focal and local, based upon our conviction that we were only affecting the tumour we were treating and not the entire patient system. It turns out, based on early case reports and more solid evidence produced over the last five years or so, that this premise is not always true,” said Goldberg.

“Most of the damage occurs where intended, but all kinds of pathways in the system are also activated after an intervention. Just like a sunburn that affects a local piece of skin can be accompanied by a headache or fever, a systemic reaction can follow an interventional oncologic procedure in some patients and under certain circumstances. Depending on the type of tumour and its location, a series of both positive and negative systemic effects can be unleashed,” he added.

These effects are rather variable and are currently hard to predict, but one thing is certain: there is a good side and a bad side – the Holy Grail and Pandora’s Box, as Goldberg put it. END_OF_DOCUMENT_TOKEN_TO_BE_REPLACED