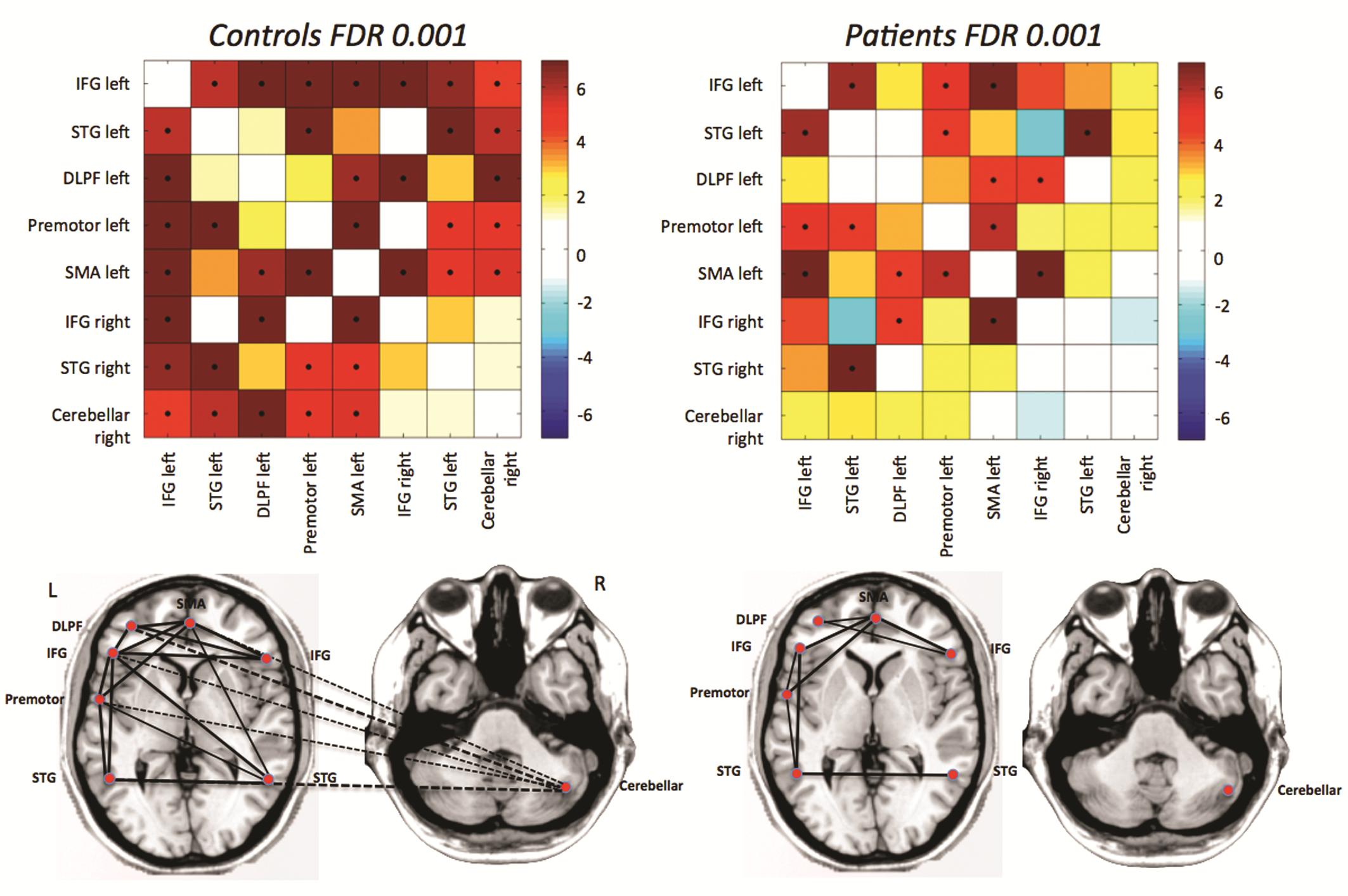 They have already noticed that several networks work differently in autistic patients. “For instance, in autistic children with language impairment, the classical language network is disconnected from the cerebellum (Figure 1). Now the cerebellum becomes the focus of major structural and functional studies in autism,” said Stefan Sunaert, Professor of Neuroradiology at Leuven University Hospital and Chairman of the ECR session. Researchers are also wondering how rfMRI could help predict dementia and Alzheimer’s disease (AD); pathologies that affect a growing number of people worldwide. To this day, rfMRI cannot show whether a patient will ever contract AD, but techniques will soon emerge, Sunaert believes. “We hope to develop techniques within the next five to ten years to predict whether somebody aged 40 to 45 who complains about a slight impairment or memory deficit is going to become demented within ten years, or age normally,” he said.

Neuroscientists believe they are only beginning to see the tip of the iceberg. “We finally have tools to non-invasively study the human brain in normal subjects and diseased patients. But how the brain works exactly is something we still need to discover and learn in order to understand disease,” Sunaert said. dMRI enables the visualisation of white matter architecture, i.e. major white matter tracts interconnecting the brain and the spine, and the connection between brain regions (Figure 2). Together with rfMRI, it has become increasingly relevant in the differential diagnosis of patients with chronic disorders of consciousness, who represent a large population. In Belgium alone, as many as 150 patients with chronic disorders of consciousness are diagnosed every year. In the EU, an estimated 100,000 patients suffer from one of these disorders, which include minimally conscious state, persistent vegetative state – now known as unresponsive wakefulness syndrome – and locked-in syndrome. 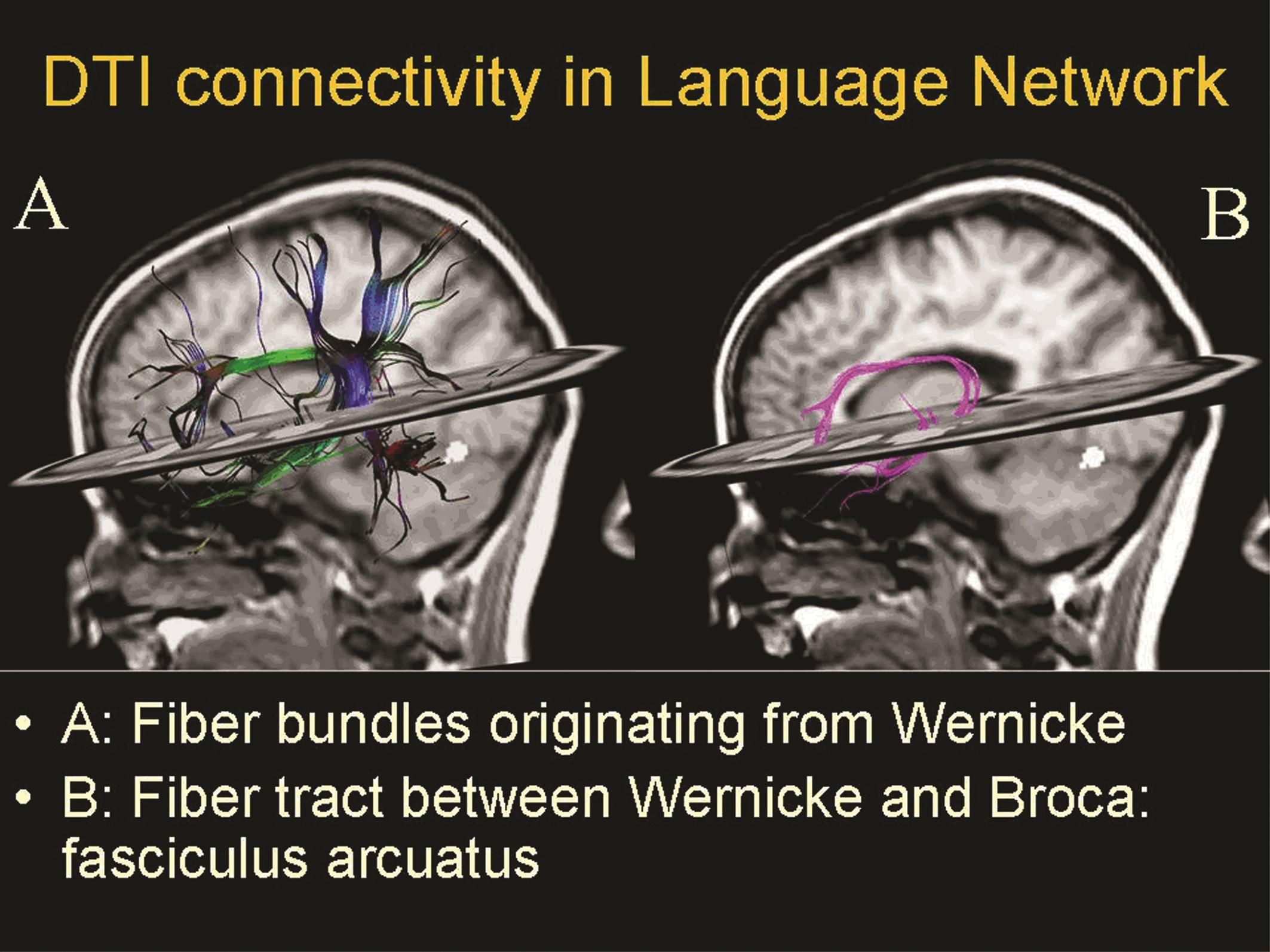 Fig. 2: Combination of fMRI of language and diffusion MRI fibre tractography in a healthy subject.

“We are really talking about a lot of patients here, patients who have been neglected for too long,” said Professor Steven Laureys, Director of the Coma Science Group at the Department of Neurology and Cyclotron Research Centre, University Hospital of Liège*. The past fifteen years have seen a major change in the scientific understanding of comas, with the main advances being made using EEG, positron emission tomography and MRI. Experts are now able to prove that some patients who seem comatose are in fact conscious, but their ability to ccommunicate with the outside world has been damaged, for instance following a traumatic or anoxic event. At the ECR, Laureys will explain how locked-in syndrome patients are able to communicate through MRI, showing that they still feel, hear and understand what is going on around them, a development which could dramatically improve their fate. “These patients are a real challenge for us medically. We must make sure that we have the right diagnosis and the right prognosis. There is also the neuroscientific challenge of studying these patients to better understand what determines consciousness. This seal of understanding through the study of brain functioning by MRI in coma-related states brings all these ethical challenges and philosophical issues,” he said.

Laureys uses fMRI to look for signs of consciousness in patients who are considered to be comatose or vegetative. His conclusion is that only this technique can provide some evidence of consciousness. “We asked patients to do tasks like hand squeezing, looking up or looking down. Sometimes the brain wants to do these tasks and the motor cortex wants to send the command but it never arrives to the muscles because of a lesion in the nerves, spinal cortex or brainstem. When it didn’t work, we asked these patients to imagine playing tennis or walking around their houses, which, in a person who understands your question, automatically triggers activity in the cortex. We can easily see this with fMRI,” he explained. A simple dialogue through yes and no questions is now possible. Doctors use ultimate classifiers that identify for instance a block called ‘motor activation’, which means yes, and another block that means no. “We try to let their scans speak, we collect MRI results and decode those signals,” he said. rfMRI offers additional clues by showing the activity of the default mode network. Results showed that volunteers and locked-in syndrome patients both presented with a fully active network, which was less active in minimally conscious patients and broken apart in comatose patients. Locked-in syndrome or pseudocoma patients thus show the same level of consciousness in rfMRI as a fully conscious person. To be considered conscious, a person does not only need to have an active network of neurons, but these neurons must also be connected with each other. dMRI allows researchers to look at these connections. Obviously, the information brought by fMRI and dMRI has a huge impact on treatment and prognosis. Pain killers may be administered and the chances of recovery can be reassessed.

These advances have also shed light on one of the most enigmatic phenomena in medical science. “MRI allows us to change our understanding of what we consider a coma or unconscious state, it is truly fascinating,” Laureys said. Inevitably, these results also raise questions about patient autonomy. “This is going to be a big discussion in the coming decades. We will have discussions with legal scholars about how new technologies are going to give a voice to this minority of patients, who can now express themselves through machines, and we need to deal with this now,” he said.
One problem that remains is that not all patients can benefit from this facility because of the lack of appropriate equipment. MRI is expensive and only available in some centres, so patients sometimes have to travel from abroad to benefit from it. “We want technology to go to the patients and that would be another challenge,” he said.

The ethical debate surrounding those questions is already tense, with opposing groups pushing their own agendas. “It is very challenging. Sometimes it’s a little like we’re in the middle of a bridge and they’re shooting at us from both sides,” Laureys said. “We respect that people have distinct religious or philosophical beliefs. But one cannot make the right decision if one is building on sand, and fMRI and other tools can certainly help here.”

This article previously appeared in the ECR 2013 Preliminary Programme
All images provided by Prof. Stefan Sunaert.