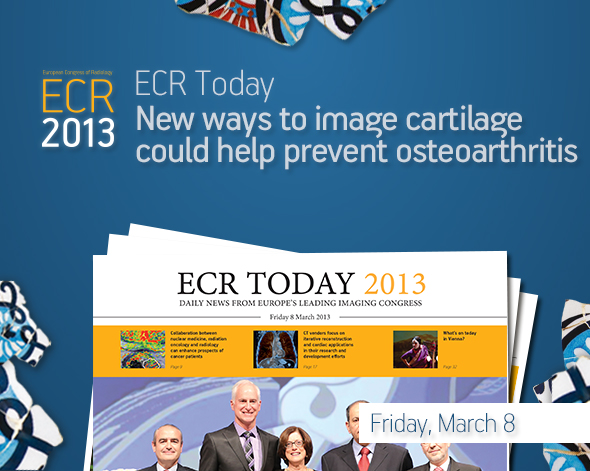 Osteoarthritis, a degenerative joint disease, affects a large number of people worldwide. But with the emergence of new MRI techniques, researchers believe they will be able to prevent its development in the near future. Experts will present the latest methods to assess cartilage tissue quality at a very early stage and discuss remaining challenges, in a dedicated New Horizons Session, today at the ECR.

Cartilage is composed of collagen and glycosaminoglycans (GAG), which are responsible for the biomechanical properties of cartilage tissue. An interesting way to image cartilage is to look at the amount of GAG, which decreases at the onset of tissue degeneration, a process which occurs due to ageing or an induced defect, for instance trauma or surgical intervention in the joints. If left untreated, a tissue defect can lead to osteoarthritis. GAGs are known to be among the earliest biomarkers of cartilage degeneration, and if a focal reduction in the amount of GAG can be identified, then therapy to avoid further damage can begin. 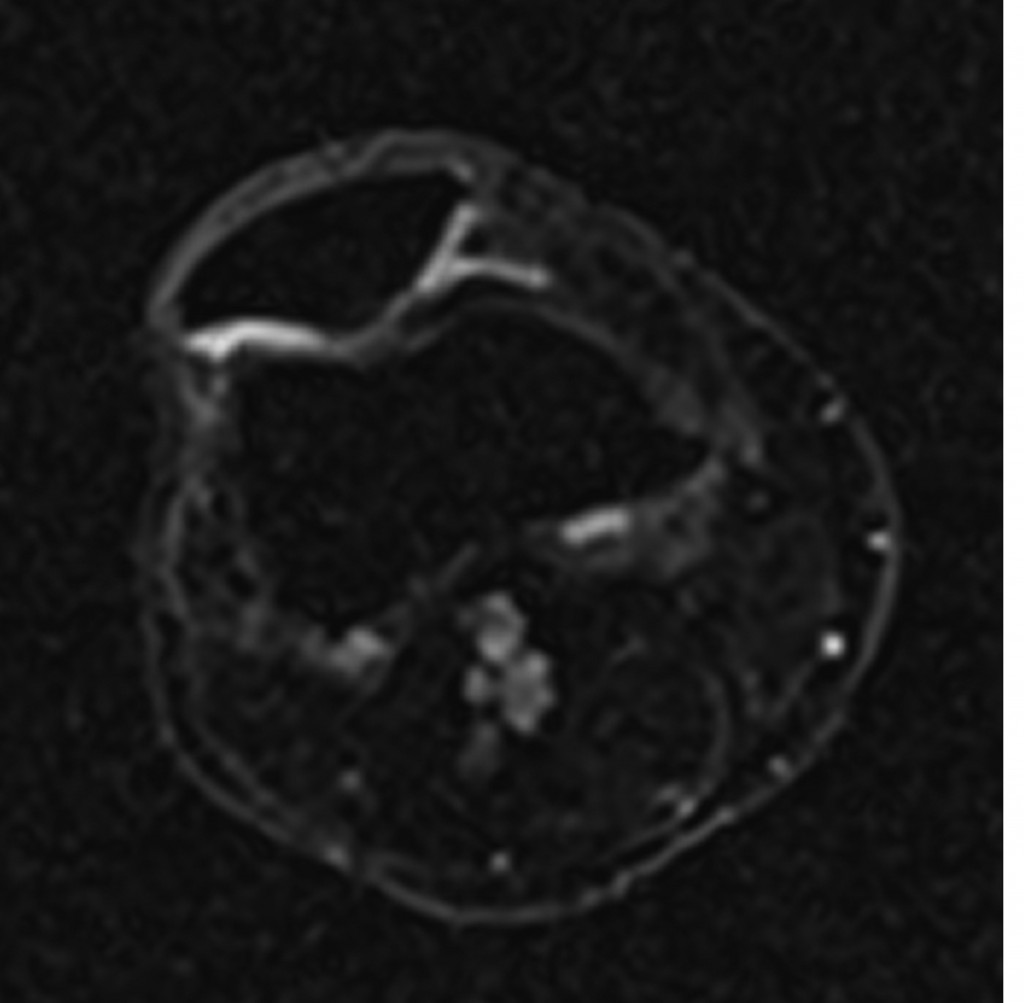 Sodium image in the axial plane of the patella shows the patellar cartilage. At the border from the medial to the lateral facet of the patella an area with decreased sodium signal-to-noise ratio (SNR) is visible which corresponds to a decreased content of glycosaminoglycan (GAG) although the cartilage thickness is preserved. This means an early stage of cartilage degeneration in this area with a focal loss of GAG.
(Provided by Prof. Siegfried Trattnig and the MR Centre of Excellence)

To image these early changes, three main techniques have been developed, all performed with MRI: sodium imaging, delayed gadolinium-enhanced MR imaging of cartilage (dGEMRIC) and GAG-dependent chemical exchange saturation transfer (gagCEST) imaging. For sodium imaging, a simple physical reaction is exploited: sodium ions have a positive charge and attach themselves to GAGs / which have a naturally occurring negative charge. This allows radiologists to track them in the body. Thanks to a special sodium coil, sodium in articular cartilage can be visualised and quantified, and these volumes can be directly correlated with GAG content.

“Performing sodium imaging is very exciting at the very early stage of cartilage degeneration, because we can already visualise glycosaminoglycan loss. All the other structures of the cartilage matrix are still intact, the network is intact, everything is the same except the amount of glycosaminoglycans. It is a formidable biomarker of early degeneration, it gives us the chance to identify patients at risk earlier and to possibly alter tissue degeneration, to prevent the development of osteoarthritis,” said Professor Siegfried Trattnig, medical director of the MR Centre of Excellence at Vienna Medical University.

The joint can still regenerate with a GAG loss of up to 25%. Within this limit, drug therapy can be initiated, which focuses on replenishing GAG levels. 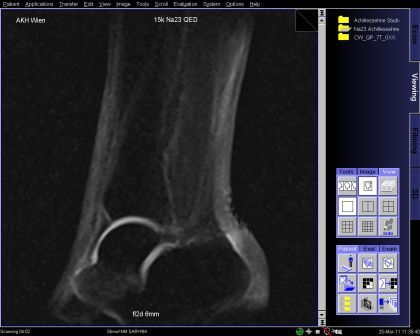 Sodium image of the ankle joint in the sagittal plane shows intact cartilage with high sodium SNR and a thickened Achilles tendon in the distal portion with increased sodium SNR which corresponds to an increased GAG content, which in the Achilles tendon represents chronic Achillotendinitis.
(Provided by Prof. Siegfried Trattnig and the MR Centre of Excellence)

Groups of patients are at risk of cartilage degeneration, for instance people who have suffered trauma of the knee joint with meniscal or cruciate ligament tear and have received partial meniscectomy or ligament reconstruction. According to orthopaedic surgeons, the risk of developing osteoarthritis of the joint is more than seven times higher for these patients than for people who have never had this kind of injury.

For patients with trauma-induced defects, cell-based cartilage transplantation is a recommended option. Candidates must be under 50 and have a high-grade focal defect in the knee joint.

Sodium imaging can help assess the efficacy of different cartilage repair procedures by showing the development of GAG in the repaired tissue. “We are now able to visualise and quantify how much GAG has been produced over time. If, after one year, the patient shows the same content of glycosaminoglycans in the repair tissue compared to healthy cartilage, then this is optimal for the biochemical properties, in particular for the stiffness of the repair tissue,” Trattnig said.

The sodium image of this patient (c) one year after autologous cartilage transplantation in the knee joint shows a low sodium SNR (the white arrows mark the border of the transplant), which corresponds to decreased GAG content of in the repaired tissue. This finding is confirmed by dGEMRIC another GAG specific technique (b). However the morphological image (a) with proton-density weighted FSE shows a good outcome with a good filling of the defect and a good integration of the repaired tissue.
Copyright Radiology (with permission)

To carry out sodium examinations, an MR scanner with multinuclear capability and a dedicated transmit and receive sodium coil is required. However, the high signal-to-noise ratio of a 7 Tesla scanner is also needed to compensate for the low sensitivity of sodium in comparison to proton imaging (about 5,000 times lower for sodium). With only 50 7T MR scanners worldwide, the technique clearly faces a shortage of equipment.

“With gagCEST, we exploit the chemical exchange between exchangeable protons that are bound to GAG molecules and the surrounding bulk or free water molecules. We label the GAG molecules, then this label is transferred by chemical exchange to bulk water molecules, which is our major MRI signal, and we subsequently image the regular bulk water signal. With this information, we can determine how much label was transferred through the bulk water signal,” he explained.

GAG concentration in the articular cartilage is in the millimolar range whereas bulk water concentration is in the high molar range. Being able to transfer and accumulate the GAG-specific label on bulk water molecules means a 100 to 1,000-fold increase in sensitivity for the detection of GAG molecules. This means that gagCEST imaging can be performed using 3T MRI systems.

Both sodium and gagCEST allow radiologists to assess the development of transplanted GAG in cartilage repair, which provides information on the biochemical quality of the repaired tissue. But it is not an indication of patient outcome, Schmitt explained. “It is a little bit of a problem, because the biochemical features as detected by MRI or radiological means do not necessarily correlate with the clinical outcome of a patient. For instance, the sensation of pain can be very different in humans,” he said.

With gagCEST, researchers are looking to accelerate image acquisition time, currently at eight to ten minutes, which is too long for the clinical setting. They also have to find appropriate protocols for imaging the hip joint, which has very thin cartilage. These protocols have to compensate for the distance between the object and the coils, which is larger in the hip compared with small joints such as the knee. Experts will tackle all these and other issues today.